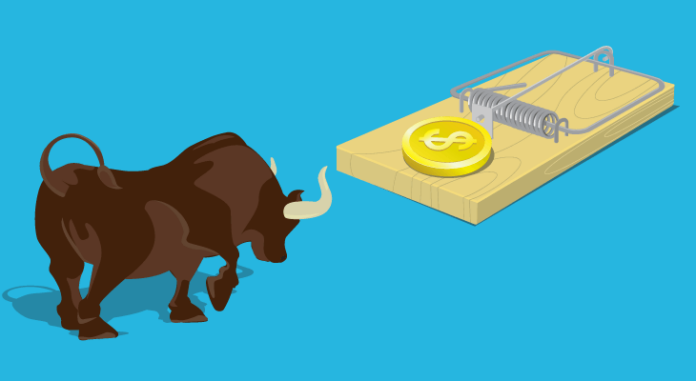 A bull trap is a situation when traders put on a long position when the price of a currency pair is rising, only for the price to reverse and move lower.

A bull trap is also known as a “sucker’s rally“.

A bull trap fools some traders into thinking a market is done falling and that it’s a great time to buy.

But lo and behold, it turns out it is NOT a great time, because the price soon reverses direction, catching buyers in a money-losing trap.

Bullish traders think the recent price action signals that a downtrend has ended when it actually has NOT.

Instead of rising further, the price stays flat or the downtrend resumes.

A bull trap results in a false trend reversal when the price is in a downtrend. 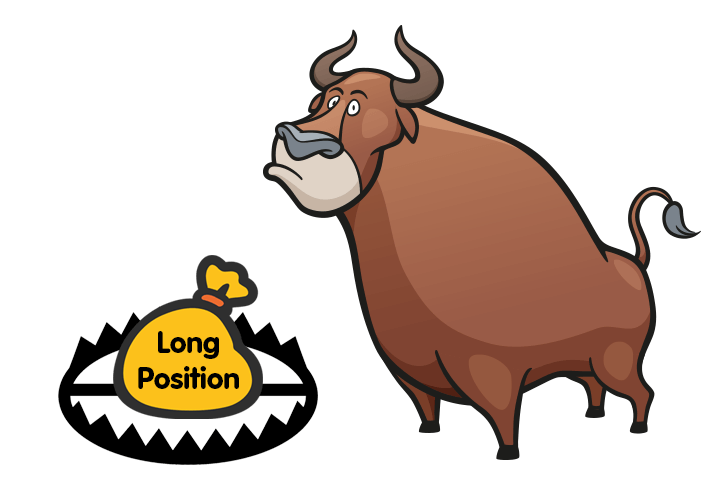 A bull trap is the opposite of a “bear trap” which can fool traders into selling out too soon in the middle of a bull market.

Bull traps can emerge after a downturn appears to have been exhausted.

After a steep price declines, there are obviously folks who see a “bargain” and want to grab an early seat for the ride back up or simply pick a bottom.

Other traders want to exploit or take advantage of this behavior.

These traders, usually institutional traders, who “set” the bull trap do so by buying the currency pair until it fools other traders into thinking its downtrend trend has stopped.

Large traders will buy large amounts in order to artificially drive the price upward to create a “false bull market”.

Behind the scenes, other lovely names are a “bull market mirage” or “bull…sh*t market”.

Bull traps tempt traders into entering long positions based on the expectation that price will continue to rise which never happens.

These initial buying spurts may push prices above certain chart levels, and these “breakouts” can trigger more buying.

The gullible and/or amateur traders who fall into the bull trap will often go long, thinking the price will rise further.

At that point, the institutional traders who set the trap will sell at the now higher price and will release the “trap”.

This counter move produces a trap and often leads to a sharp fall in price.

The breakouts are actually fakeouts, the price soon resumes a downward path.

Eventually, the “suckers” are forced to exit out of their long positions.

To exit a long position requires selling, so this selling pressure will cause the price to fall even further.

The bulls are caught in a trap. They got tricked.

Once the bull trap is released, the price usually resumes its downtrend.