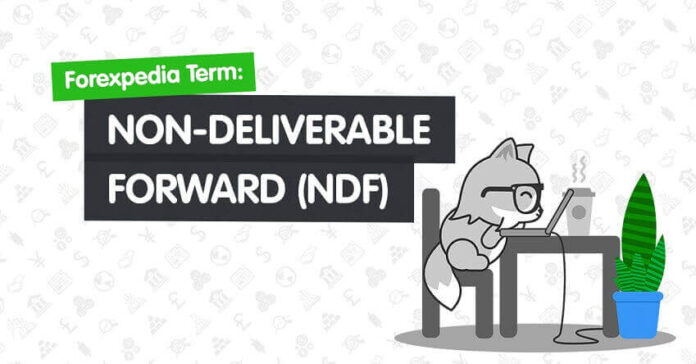 A non-deliverable forward (NDF) is a forward or futures contract in which the two parties settle the difference between the contracted NDF price and the prevailing spot market price at the end of the agreement.

A non-deliverable forward (NDF) is a two-party currency derivatives contract to exchange cash flows between the NDF and prevailing spot rates. One party will pay the other the difference resulting from this exchange.

What is an NDF?

NDFs, which are traded over the counter (OTC), function like forwarding contracts for non-convertible currencies, allowing traders to hedge exposure to markets in which they are unable to trade directly in the underlying physical currency.

Rather than delivering in the underlying pair of currencies, the contract is settled by making a net payment in a convertible currency, proportional to the difference between the agreed forward exchange rate and the subsequently realized spot-fixing.

This fixing is a standard market rate set on the fixing date, which in the case of most currencies is two days before the forward value date.

The basis of the fixing varies from currency to currency but can be either an official exchange rate set by the country’s central bank or other authority or an average of interbank prices at a specified time.

NDFs are distinct from deliverable forwards in that they trade outside the direct jurisdiction of the authorities of the corresponding currencies and their pricing need not be constrained by domestic interest rates.

The bulk of NDF trading is settled in dollars, although it is also possible to trade NDF currencies against other convertible currencies such as euros, sterling, and yen.

How does an NDF work?

All NDF contracts set out the currency pair, notional amount, fixing date, settlement date, and NDF rate, and stipulate that the prevailing spot rate on the fixing date be used to conclude the transaction.

If one party agrees to buy Chinese yuan (sell dollars), and the other agrees to buy U.S. dollars (sell yuan), then there is potential for a non-deliverable forward between the two parties.

They agree to a rate of 7.00 on $1 million U.S. dollars. The fixing date will be in one month, with settlement due shortly after.

If in one month the rate is 6.9, the yuan has increased in value relative to the U.S. dollar. The party who bought the yuan is owed money.

If the rate increased to 7.1, the yuan has decreased in value (U.S. dollar increase), so the party who bought U.S. dollars is owed money.

If you liked this article, then please subscribe to our Newsletter Services for Forex Related updates. You can also find us on Facebook and can subscribe to our YouTube channel. You can also join our Telegram Channel for real-time trading analysis and discussion. Here is our service sitemap. If you have any confusion please leave your comments below.
Was this article helpful?
Like 0 Dislike 0 0 of 0 found this article helpful.
Views: 35